A mixed-used building that combines retail and commercial space with a four-floor parking garage, 100 Hood Park is one of a number of new structures at Hood Park, a master-planned urban campus that is transforming a section of the city dating back to the 17th century.

Contractors charged with the building’s façade faced a variety of challenges at the outset.

The parking garage would sit directly across from a new residential building on one side, and the architect had to find a way to lessen the impact of headlights shining into people’s homes. The preferred solution was a customized perforated aluminum screenwall system. 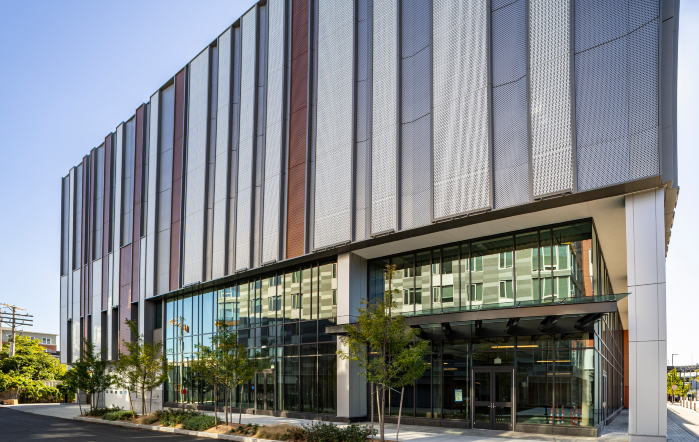 Lymo Construction Company, the subcontractor for the building’s exterior, tapped Metalwërks for its expertise in design, engineering, and fabrication.

“We knew Metalwërks could manufacture the panels themselves, but it was having Metalwërks as a partner in making sure that the engineering was going to work,” said Dan Nadeau, vice president of pre-construction operations for Lymo Construction. “They were able to answer those questions very quickly in those design-assist meetings.”

“By participating in the design-assist process, Metalwërks enabled the project team to have a finalized design that was vetted,” added John Scorsone, sales engineer at Metalwërks. “This saved months of design and shop drawing time, allowing the project to move forward at a more rapid pace.”

The resulting screenwall system fashioned and delivered by Metalwërks covered more than 14,000 square feet of the garage’s exterior wall, minimized the impact of headlights from the cars at night and allowing for constant air flow and ventilation.

The challenge for the remainder of the structure was to find a way to make a parking garage more visually interesting. Metalwërks fashioned and then fabricated ¼” thick-formed aluminum fins with a painted finish in varying sizes and shapes. The fins covered more than 28,000 square feet of the building’s outer wall.

“There’s a dramatic change as you are walking around the building. The angle and location of the fins changes the appearance,” Nadeau observed. “Some angles, you’re looking at the garage, and it appears to be a solid wall, and at some angles, it appears to be totally open.”

Metalwërks also brought the signature architectural element of the building’s façade to life: A spire that sits above the entrance. Metalwërks created a custom-perforated aluminum plate that could be back-lit for eye-catching appeal.

Crews completed construction at 100 Hood Park in August of 2020.

When it is finished, Hood Park will include seven new buildings. Construction on the urban campus is expected to continue through 2027.