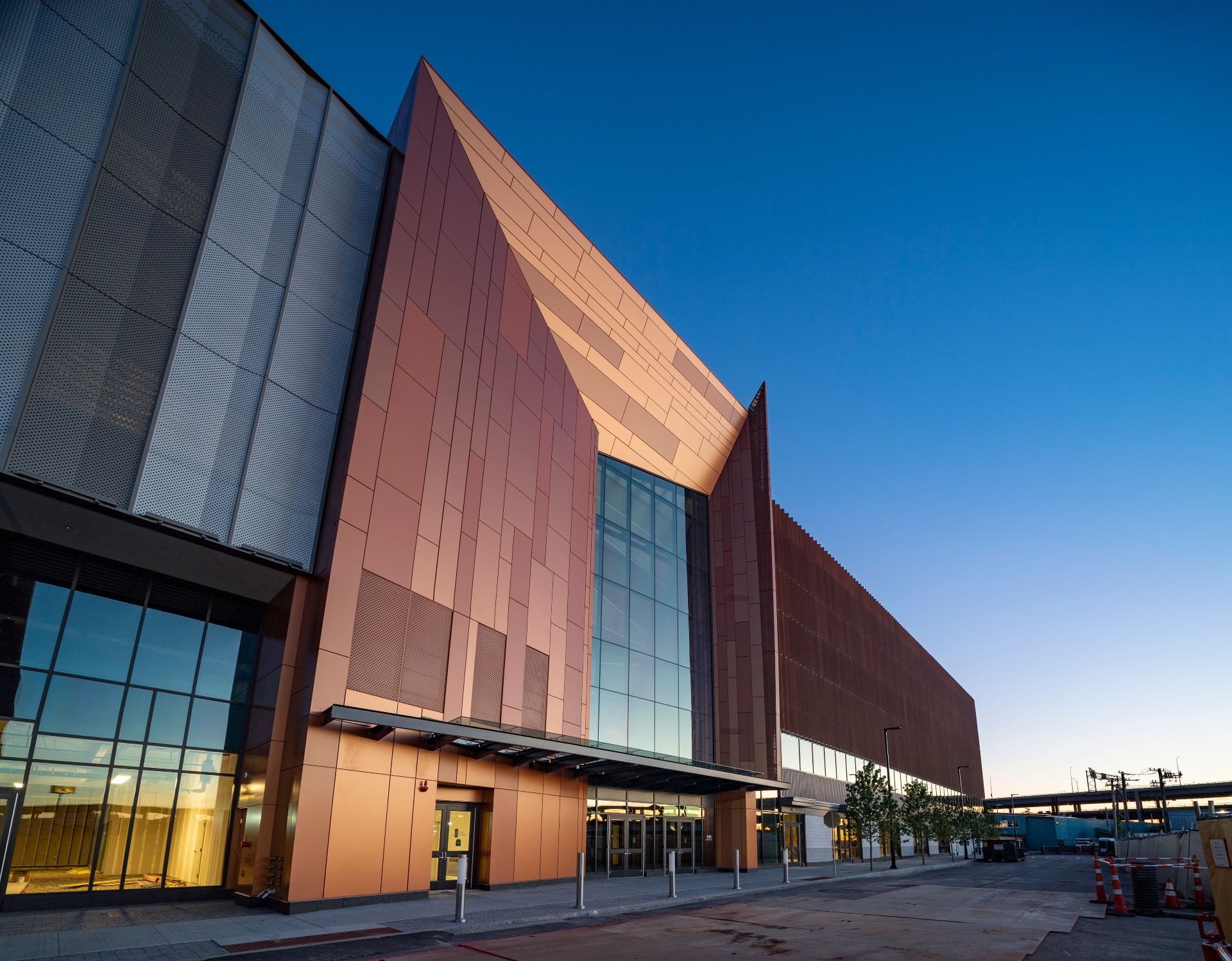 A Leap Forward in Urban Renewal

Situated in the Boston neighborhood of Charlestown, Hood Park is a master-planned urban campus that is transforming a section of the city dating back to the 17th century.

Located off I-93 on Rutherford Avenue, Hood Park began as a mill pond and later became the home for H.P. Hood and Sons, a New England Dairy Company.

New development on the 20-acre site is set to include offices, restaurants, retail establishments, laboratory/research space, and parks and green spaces.

One of the structures that anchors the entire development is 100 Hood Park, a mixed-use building that combines retail and commercial space with an expansive parking garage.

When contractors needed to identify the right materials for the building’s façade, they turned to the expertise of Metalwërks.

One of the challenges faced by the architects involved the parking structure, which occupies four floors and has nearly a thousand spaces for cars.

One side of the garage sits directly across from a new residential building with apartments. Designers had to find a way to diffuse the headlights that would shine at night from the parking garage, thereby minimizing disruption to people living across the street.

Lymo Construction Company served as the subcontractor on 100 Hood Park and was responsible for all the exterior cladding on the building.

Dan Nadeau, vice president of pre-construction operations for Lymo, quickly realized that Metalwërks was the perfect partner to serve in a design-assist role and then deliver the final product.

“We reached out to [Metalwërks] because we knew they could manufacture the panels themselves, but it was having Metalwërks as a partner in making sure that the engineering was going to work,” Nadeau said. “A lot of times we are in these meetings, and the architect is kicking ideas around. We have to be able to react relatively quickly. Having Metalwërks there was an asset to us because they are able to answer those questions very quickly in those design-assist meetings.”

“There was a lot of thought put into the perforation pattern,” Nadeau added. “How much light are we shining through them? Shining on to them?”

Metalwërks engineered and fabricated a visually interesting and functional solution that minimizes the impact of headlights from the cars at night and allows for constant air flow and ventilation on that side of the parking garage.

The challenge for the remainder of the structure was to find a way to make a parking garage more visually interesting.

Metalwërks fashioned and then fabricated ¼” thick-formed aluminum fins with a painted finish in varying sizes and shapes.

“There’s a dramatic change as you are walking around the building. The angle and location of the fins changes the appearance,” Nadeau observed. “Some angles, you’re looking at the garage, and it appears to be a solid wall, and at some angles, it appears to be totally open.”

The aluminum fins served as the external cladding for more than 28,000 square feet of the building’s outer wall. Some of the fins were 16 feet in length.

Metalwërks also brought the signature architectural element of the building’s façade to life: A spire that sits above the entrance. Metalwërks created a custom-perforated aluminum plate enclosure that could be back-lit for eye-catching appeal.

“Metalwërks was able to come up with some great detail that allowed [the spire] to be installed easily and provide the aesthetic that the design team was looking for,” Nadeau said.

When it is finished, Hood Park will include seven new buildings. Construction on the urban campus is expected to continue through 2027. 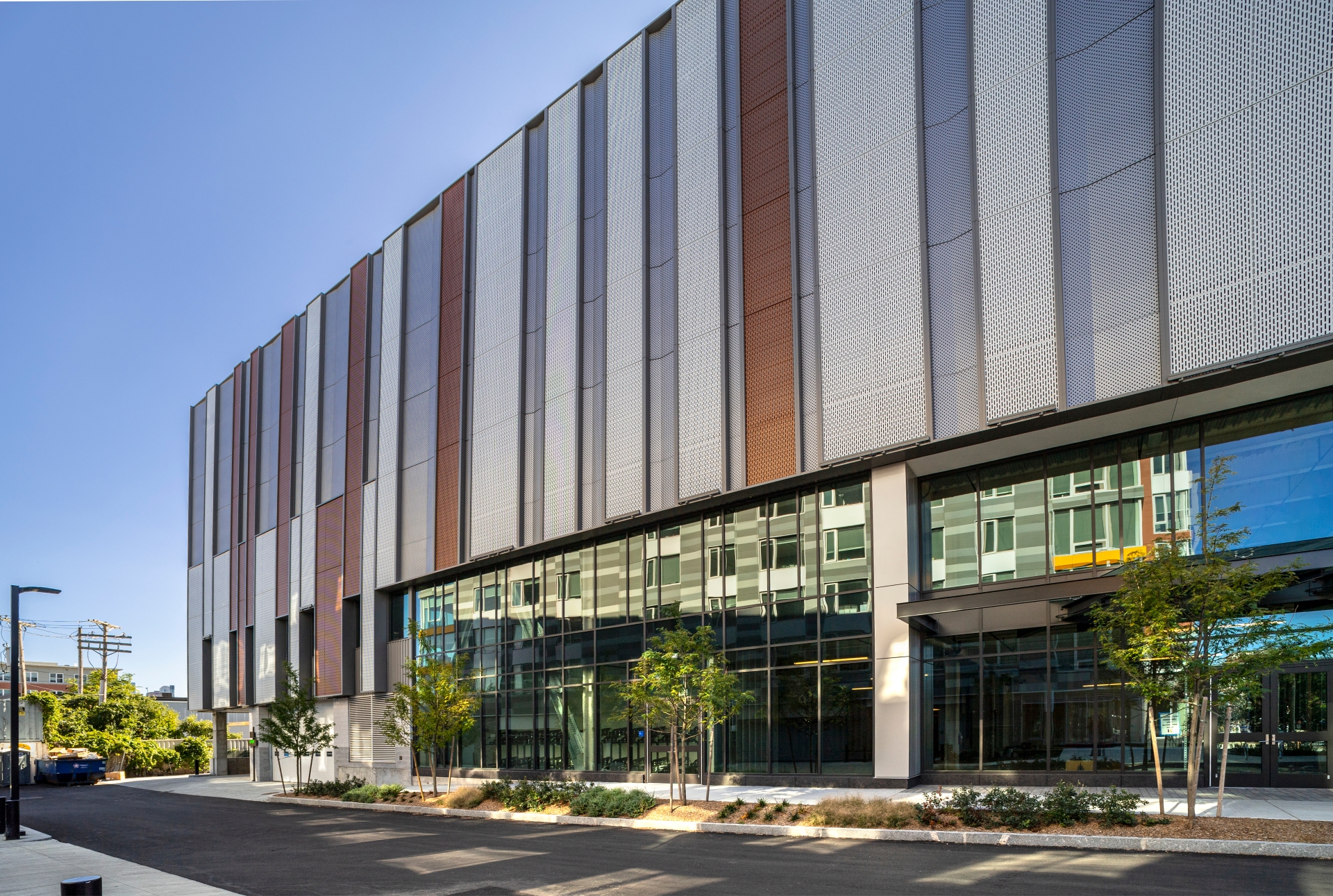 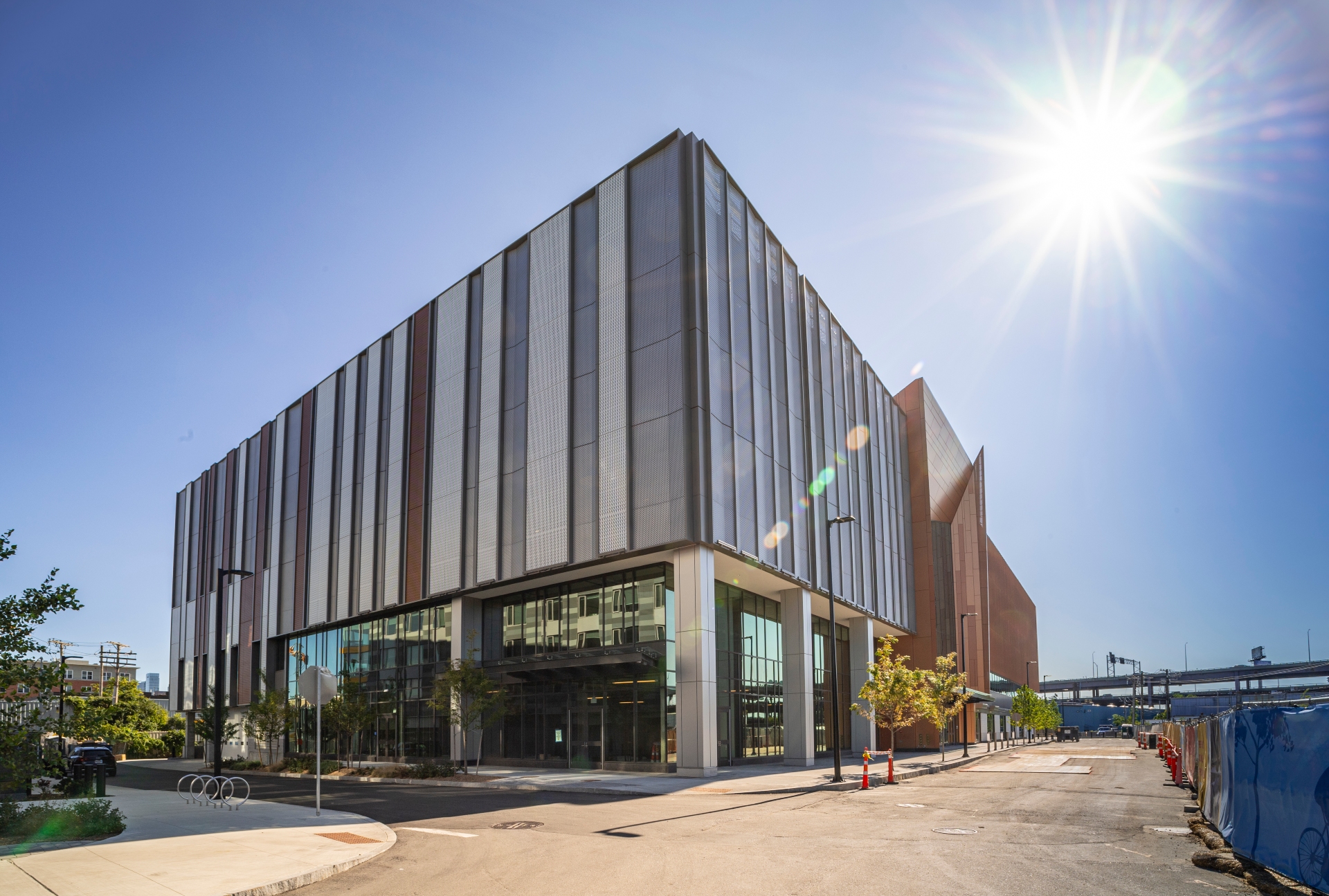 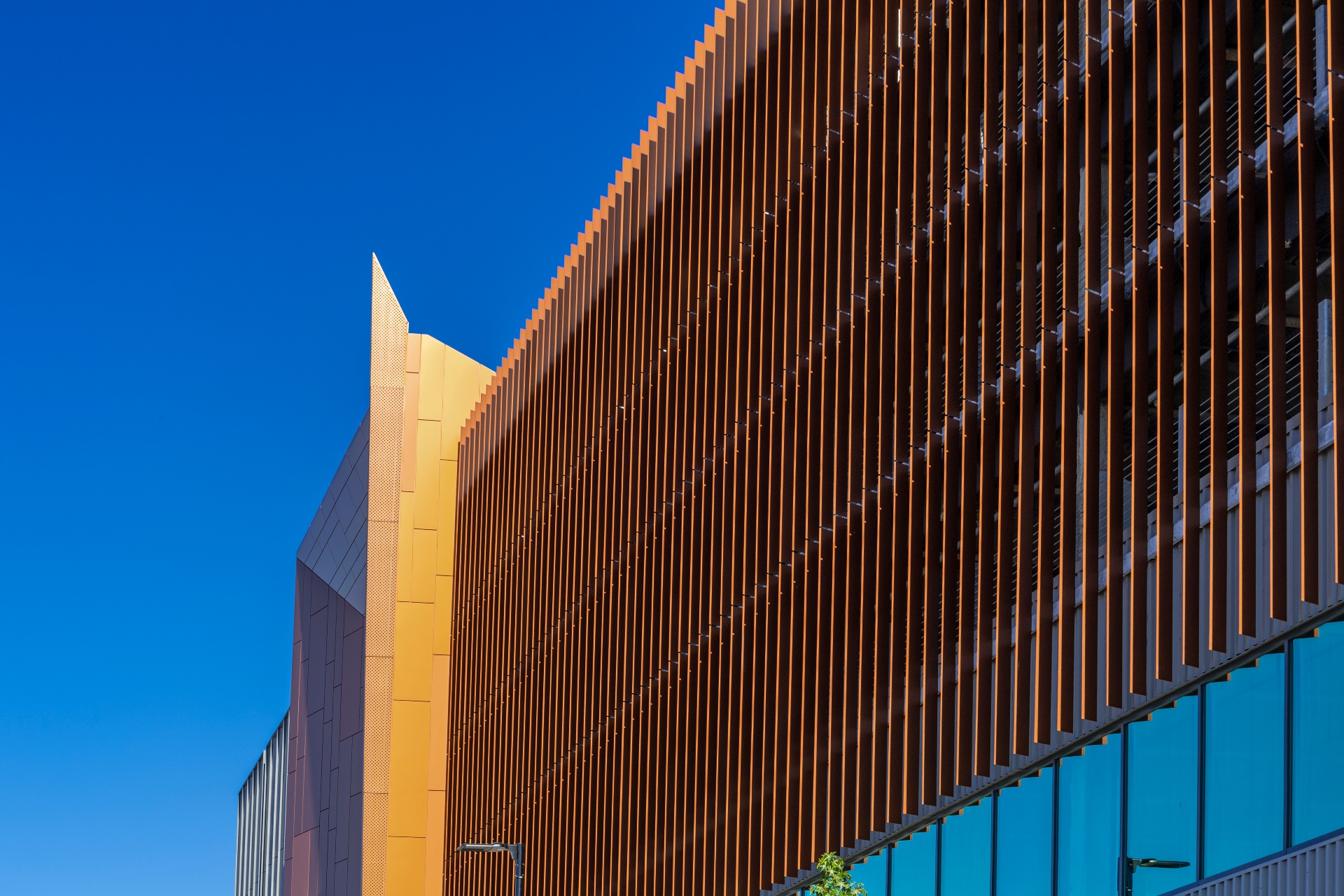 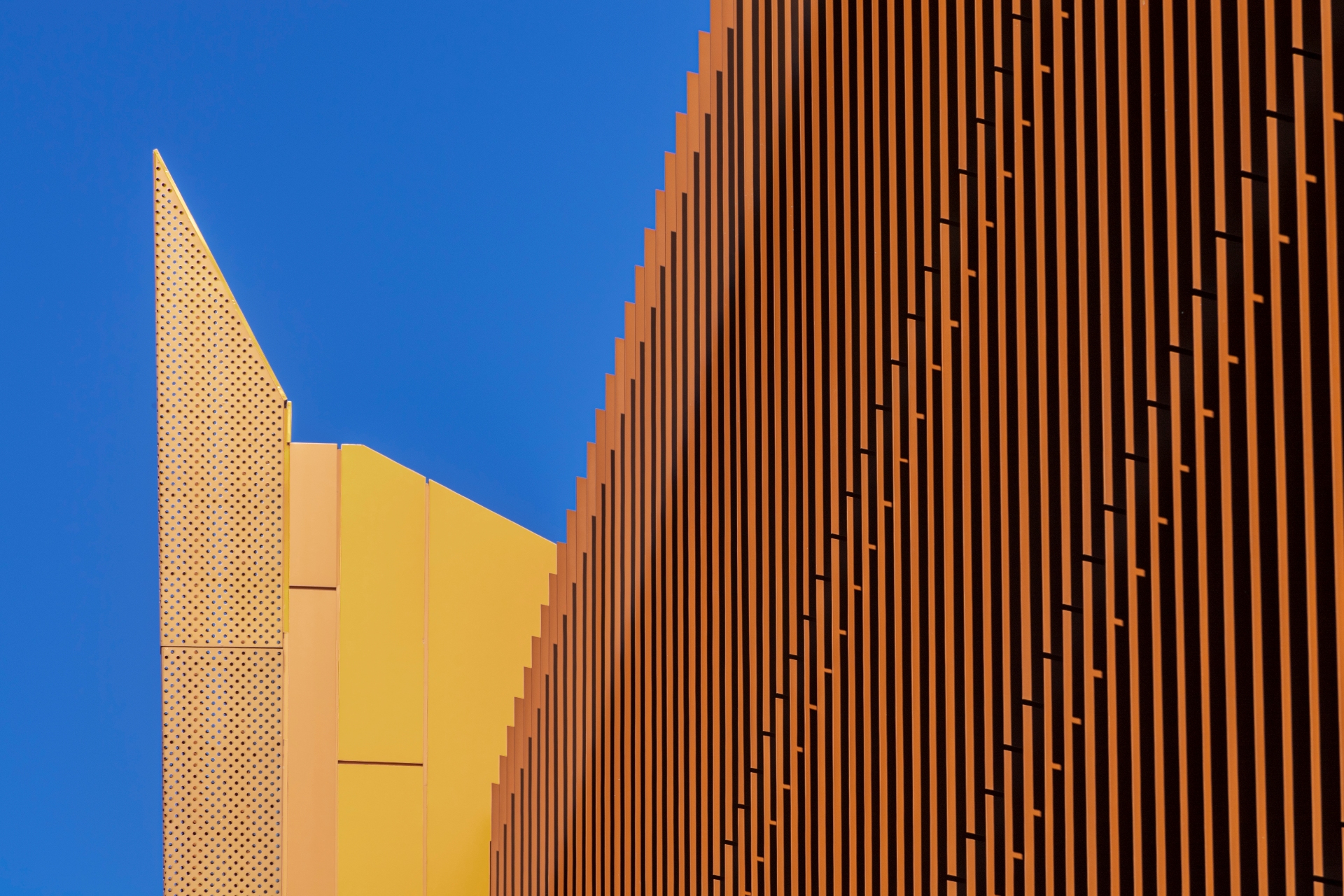 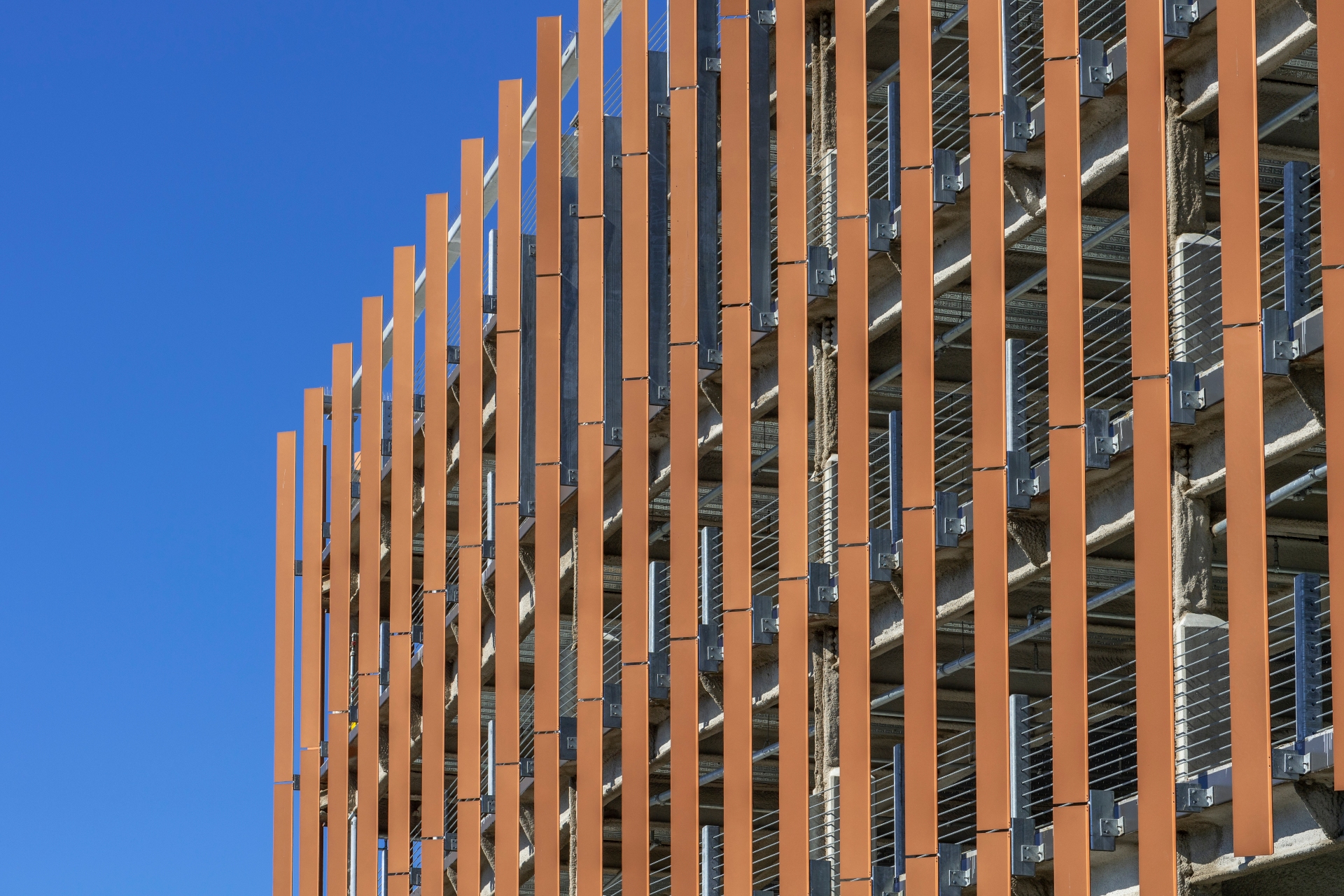 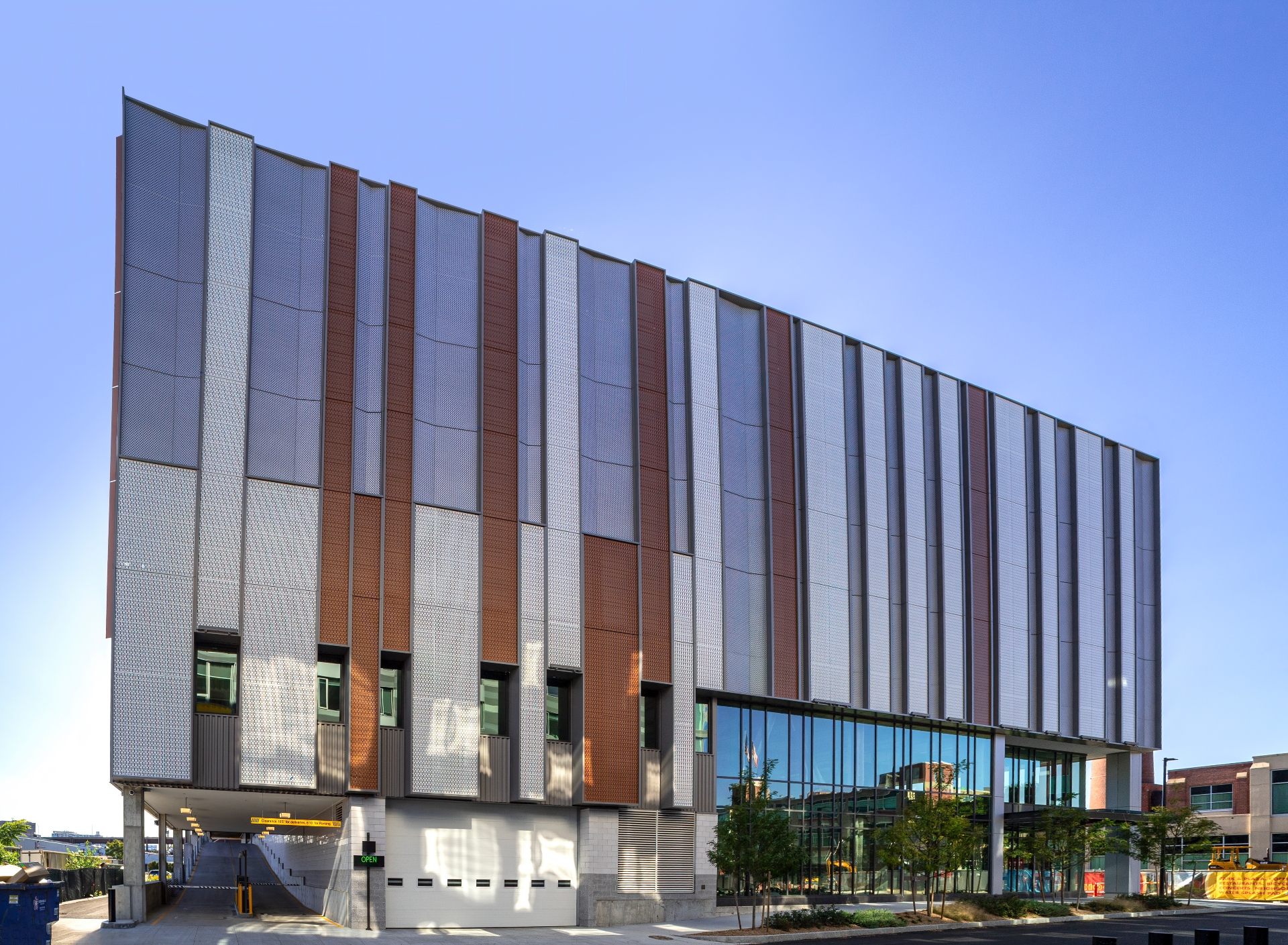 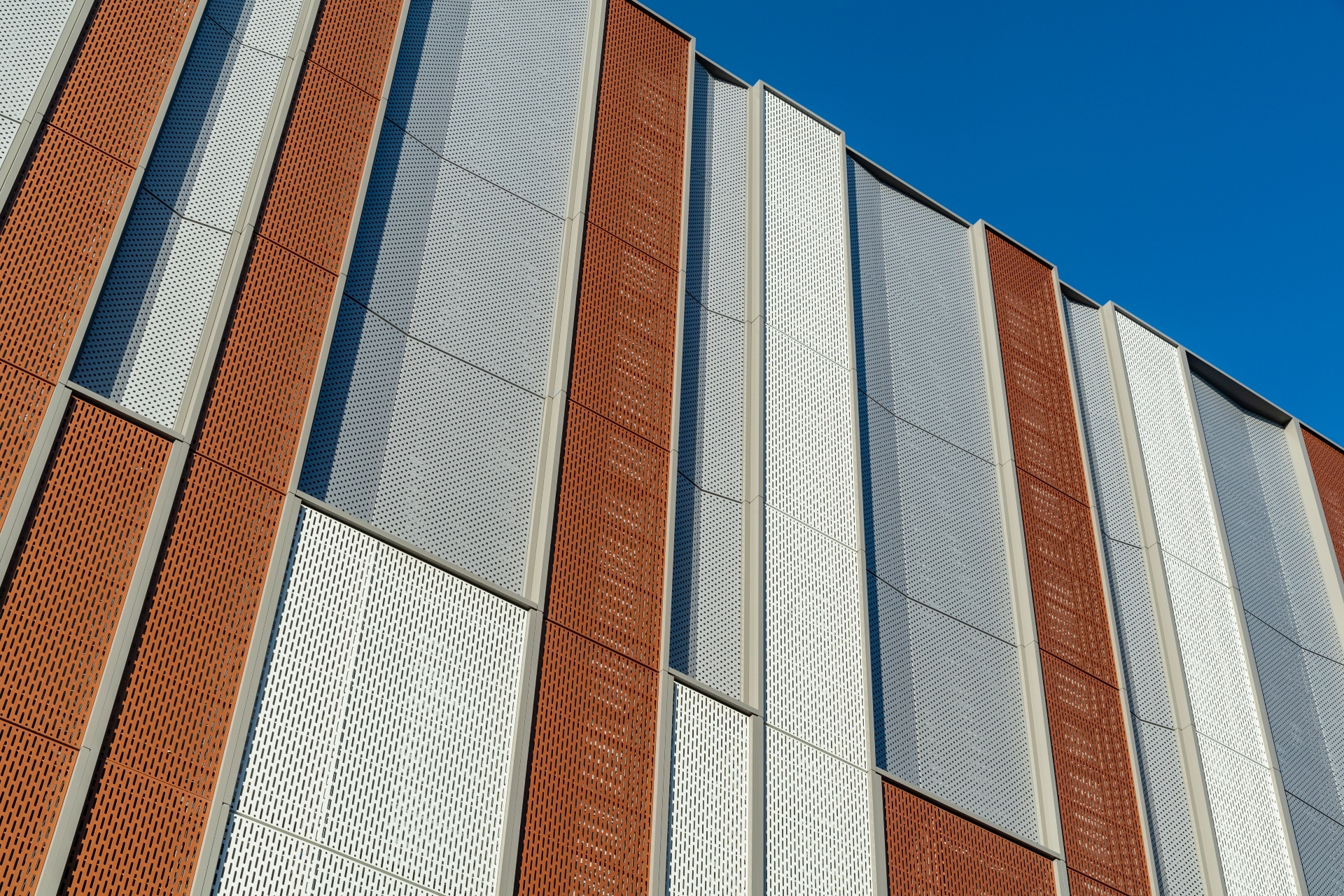 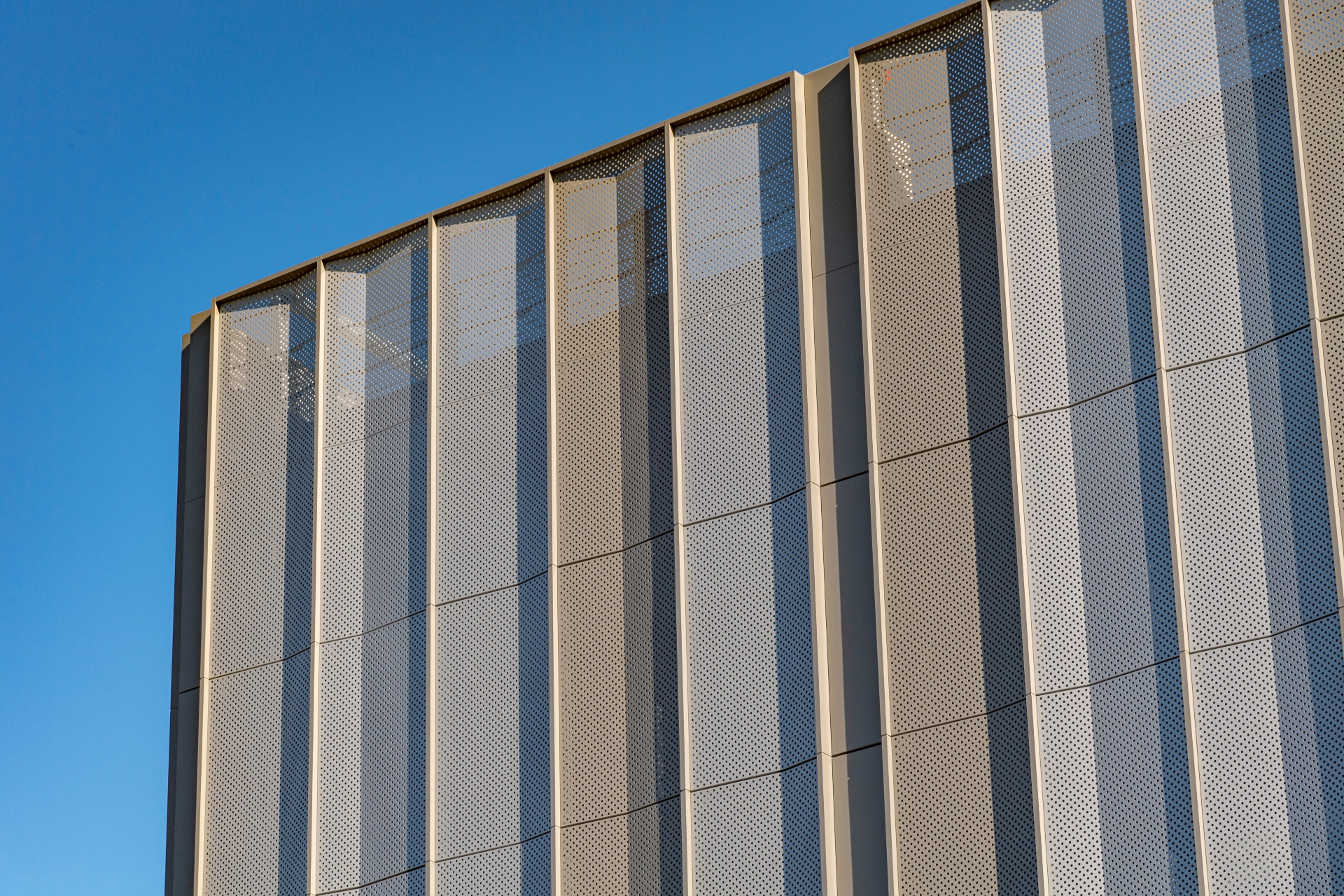 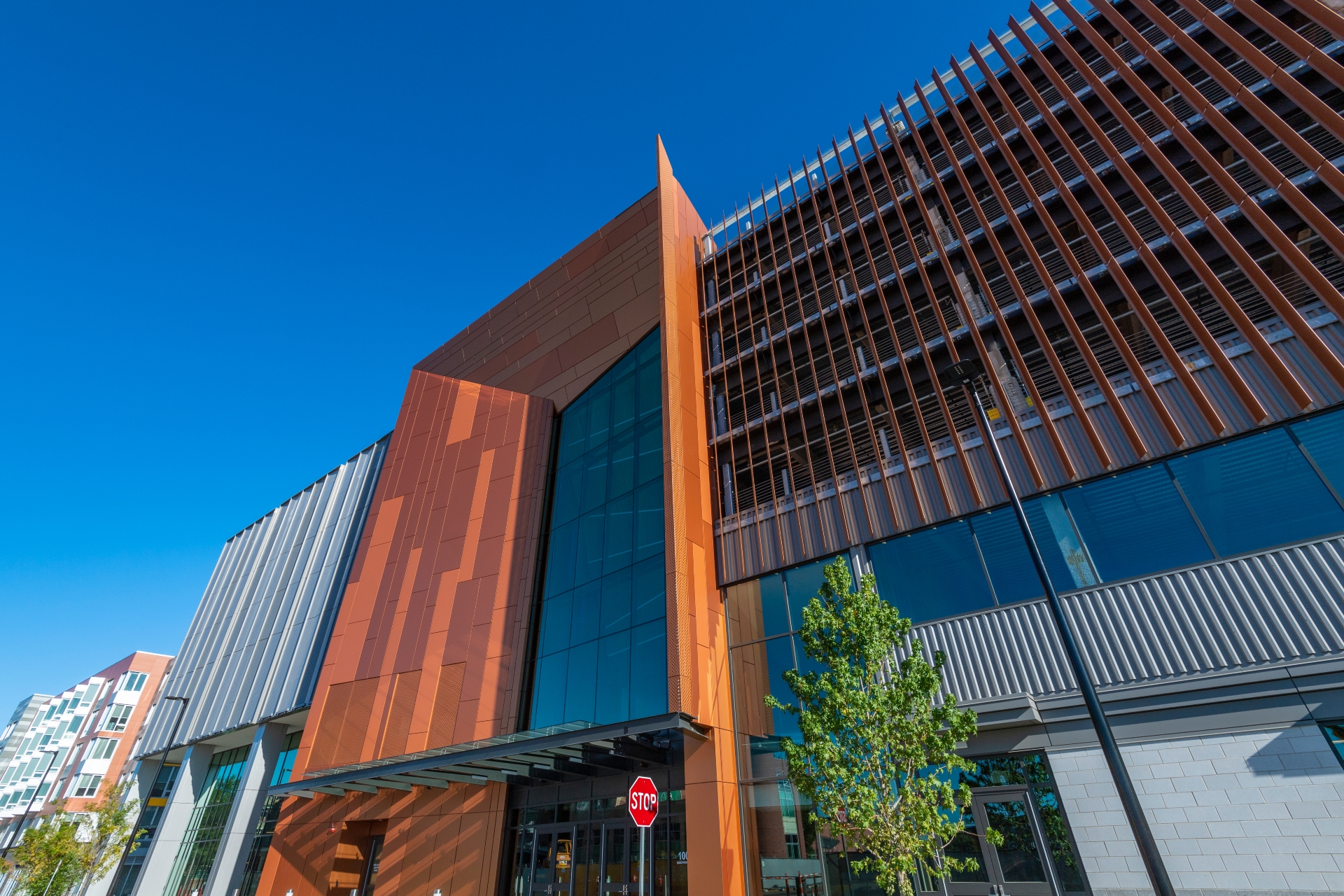