Metalwërks, a leader in architectural metal cladding and ornamental metals, recently served as turnkey specialty contractor for the design, fabrication and installation of the Port of Miami Tunnel. The tunnel, which spans Biscayne Bay, was completed in May 2014.

Metalwërks provided a monumental architectural wall cladding system for the $667 million project, which links the world’s busiest cruise ship port to highways I-395 and I-95. The tunnel, essential for continued growth at the seaport, will ease traffic congestion in downtown Miami and offer direct access for commuters, visitors and cargo trucks. It will accommodate approximately 16,000 vehicles per month. 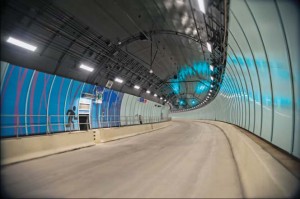 Bouygues Civil Works Florida, the project contractor, specified Metalwërks after a personal referral from John Wheaton, PE, LEED BD& and President of Wheaton and Sprague Engineering Inc. Wheaton served as the structural engineer assigned to the architectural wall cladding portion of the project and recommended Metalwërks based on the ability to design, fabricate and install highly complex architectural metal cladding systems.

“We’re always quick to recommend Metalwërks because of their full-service ability to fabricate, install and add value with the intellectual capital they possess,” says Wheaton. “The team has proven to be highly capable and distinguish themselves in a commodity market.”

All of the fabricated system components for the project were produced and staged for shipment to the site from Metalwërks’ Elkton, MD facilities to sequence with the installation schedule. During the design finishing process, the details were tweaked to create custom details at nonstandard areas of work as well as optimize fabrication and installation efficiencies in response to a severely compressed schedule.

“This was a challenging project with a tight turnaround and not many other firms I know could have handled the job with such determination,” added Wheaton.

Metalwërks completed the project on an accelerated schedule:

“This was one of the most challenging projects we have undertaken not because of the technical aspects of the products or scope, but because of the compressed schedule for completion,” says Steve Scharr, Director of Business Development at Metalwërks. “We assembled an excellent team of vendors, project managers and our subcontract installer was top notch. This was truly a well-choreographed  collaboration from the original estimate through contract negotiations and final execution.”

To learn more about the Port of Miami Tunnel, please visit http://www.portofmiamitunnel.com.