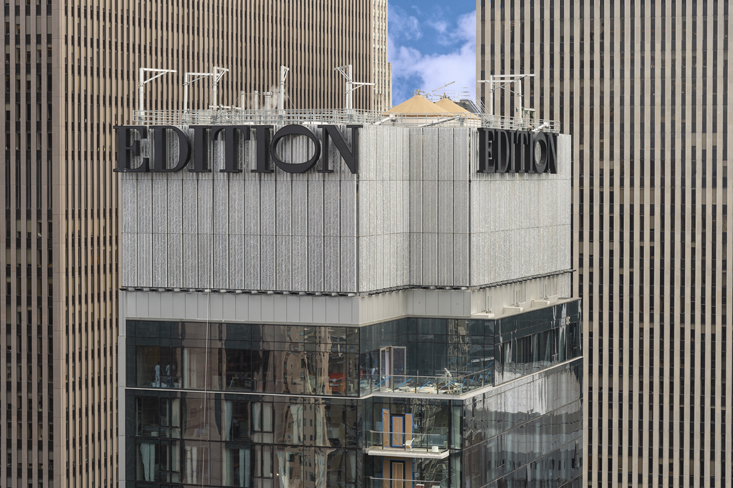 One of Times Square’s largest LED screens – covering 18,000 square feet – is also part of the brand new, 517-foot, 42-story Marriott Edition Hotel which sits smack in the middle of one of New York City’s most famous landmarks.  Located at 20 Times Square, or 701 Seventh Avenue, the 452-key hotel also features a 5,000 square-foot performance space, a 1,900 square-foot studio, and a 5,800 square-foot rooftop beer garden and cabaret theater. In other words, the hotel is massive.

Metalwërks products played a major role in the building’s cladding, façade, and other details. New “MegaPanel” unitized perforated aluminium screenwall panel assemblies were used over 15,000 square feet of the structure, and 10,000 square feet of Omniplate™ 1500 formed the projecting balcony fascia, soffit, and cornice features at the public amenity spaces on levels 10 through 14.

Significantly, Metalwërks created a custom engineered and vertically oriented screen wall assembly to accomplish several unique design goals. This screenwall assembly needed to span floor to floor to minimize structural attachment points, and it had to resist up to 45 pounds of pressure per square foot of positive and negative wind loads, and make spans of up to 12’0” between slab edge connections or the support steel at the penthouse screen wall applications. The assembly was then installed in a canted orientation to maximize its “scalloped” patterns, which become apparent during the day. The canted orientation was crafted into the assemblies at the Metalwërks assembly facility using an engineered gusset plate for end caps. Additionally, perforations were made in the aluminum face panels, and they were specifically sized and spaced to allow for a lighting system to permeate the façade. This enables the building to “glow” at night.  For further visual interest, lighting features were added at a strip of panels which run from the 12th floor up to the roof. The result? A dramatic, vertical stripe of light up the façade itself.

At the roof, the bulkhead screen walls were clad with ribbed MegaPanels, which were reinforced with internal frames and stiffeners.

Metalwërks produced approximately 10,000 square feet of Omniplate 1500 barrier wall enclosures in addition to the screenwall assemblies. The outdoor terraces on which they were incorporated will be used for hospitality events that occur regularly in the building, or for public events like the New Year’s Eve celebration in Times Square, or the Macy’s Thanksgiving Day Parade. These terraces are slightly different on each floor in terms of plan and section layout due to lighting and other design features at each level. Numerous custom conditions and cutouts were required for lighting, speakers, and the like, and Metalwërks coordinated closely with Façade Technology and its MEP counterparts to ensure everything was installed accurately and to schedule. 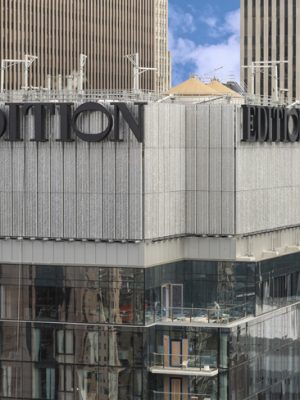 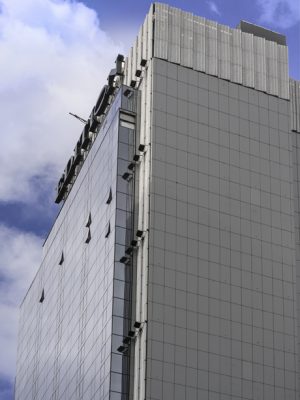 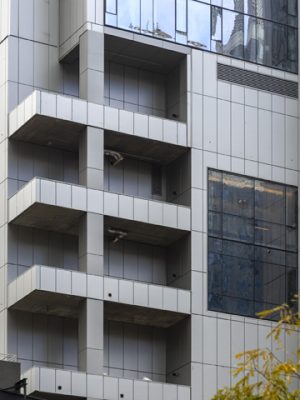 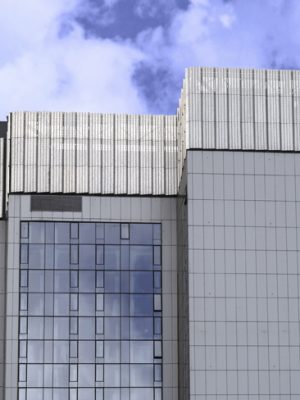 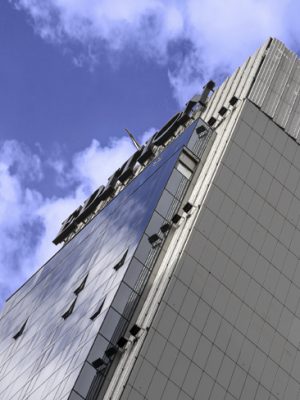 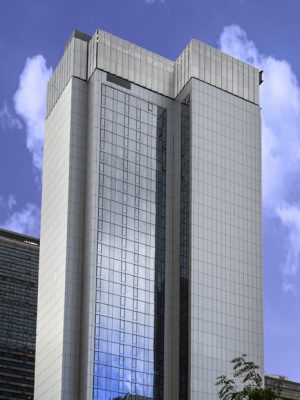 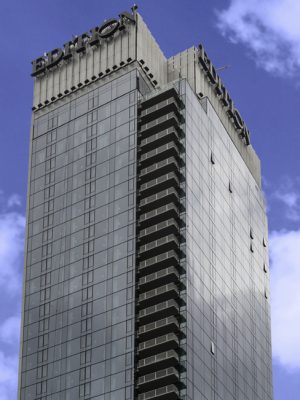 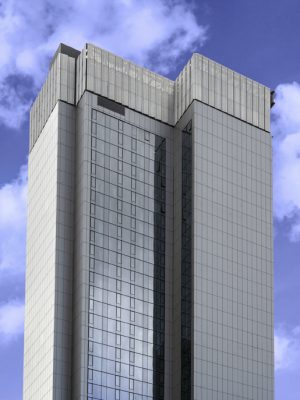