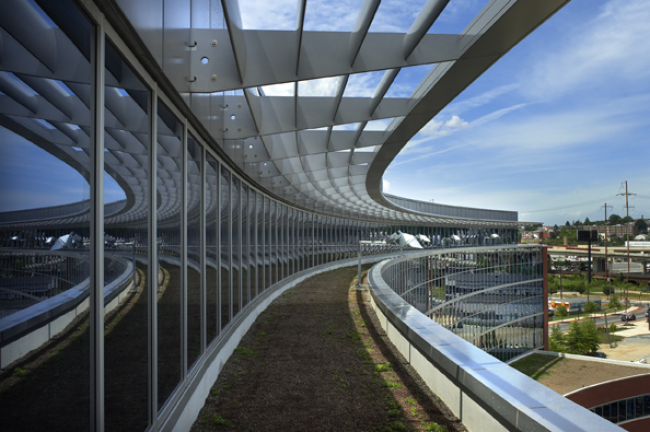 Thus mid-rise downtown office building was constructed in reclaimed area of South Wilmington, which is currently undergoing a commercial development and mixed-use renaissance reclaiming an old turn-of-the-century warehouse and mill building district into upscale residences, shops, and offices. The project design was based on a steel frame structure clad with glass curtain wall. The main floor plate is comprised of two long, sweeping, parallel curving lines roughly following the sweep of the adjacent Christina River and the opposing ends either come to a dramatic point or tight radius bull-nose to form a “bent trapezoid.”

High Drama at the 6th floor: The primary exterior walls are curtain wall clad and terminate at the main roof level with a wall made up of a stud/sheathing/ metal panel clad parapet. This parapet is one of the main focal points of the building. It is “capped” with a ten-foot, horizontally cantilevered, custom engineered and pre-assembled sunshade.

Sunshade was made up of two major components anchor clips and sunshade assemblies:

Anchor clips: Metalwërks® crews surveyed the structure and pre-located anchor clip locations allowing for steel variations and horizontal and vertical adjustment; stainless steel and galvanized steel structural clips were installed at these points with hardware and holes to receive the sunshade assemblies. Sunshade assemblies: All of the following components were shop-assembled into a unitized fashion, loaded onto flat beds in order of erection, and hoisted into place with a crane from back of truck and bolted into place. The main outriggers were ½” thick solid aluminum plate with pre-located anchor holes and rigging holes for hoisting/placing on the structure with integrated sunshade.

The horizontal blades were progressive airfoils varying from 11” up to 17” deep. The nose feature was a large assembly made up of custom designed extruded closures and formed plates.

Wall Panels: Formed Arcwall™ panels were installed with a custom 2.5” vertical reveal joint to permit the coordination of the sunshade clips into the vertical joint. The panels were back-sealed to a vertical gutter channel so that no exposed sealant would be at the panel faces. The parapet cap was integrated into the wall panel design.

Penthouse: The mechanical rooms and penthouse enclosure were set back from the exterior walls but followed the same building footprint and appearance. These wall panels were installed either over open framing engineered and installed by Metalwërks or over sheathing and commercial wrap, depending on the internal function of the space. 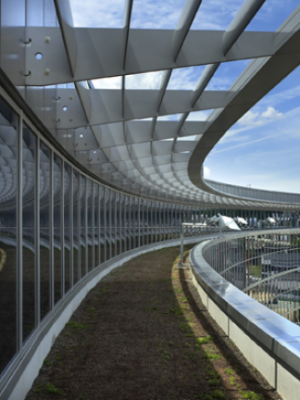 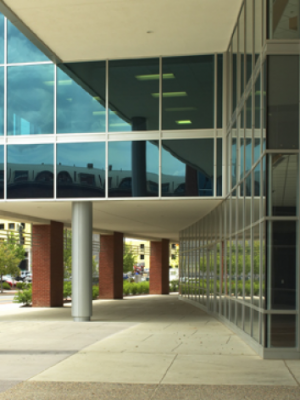 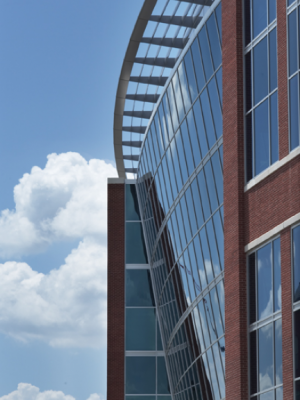 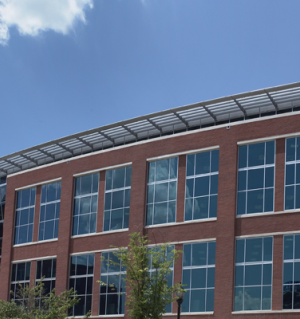 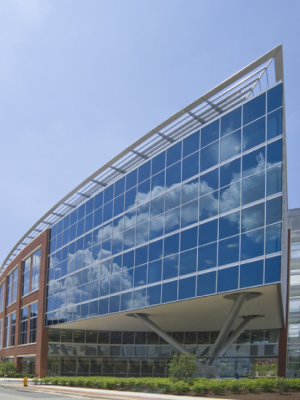 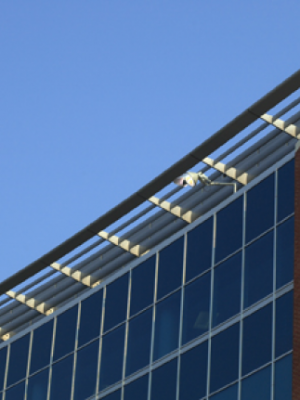